1. Mackenzie worries that she might suffer the same mysterious fate as her father and other family members. Knowing this, were you surprised she worked as a movie-location scout, requiring her to visit various places alone? If you were her, would you have chosen a job that seemed safer, like working in an office?

2. If you had a similar family history, would you have her attitude or Corey’s? Or maybe neither? Why?

3. When Dom first “meets” Mackenzie, do you think he’d have kept tabs on her if they didn’t have that blood bond? And later, what if she hadn’t found his phone? Do you think he would’ve stayed away? Have you ever met someone with whom you were instantly attracted? Do you believe in love at first sight?

4. Why do you think Dom is reluctant to tell Santiago everything? Is it because he’s his boss or do you think there’s something more? When you’re sorting through complicated feelings, do you like to talk them out with someone or work through them on your own?

5. Were you surprised that Dom and Lily had slept together in the past but were still good friends and able to work together? Do you think it’s possible to be intimate with someone you work with and not have it affect your job? Especially when you’re not together any longer?

6. At the charity auction when Mackenzie notices she has panty lines, were you surprised she took them off? Have you ever done something naughty like that in a setting where it would be shocking? Do you agree with Mackenzie’s statement that “maybe going pantyless gave her some balls?” Would she have done what she did later had she been wearing panties?

7. At the art class, why do you think Mackenzie changes her mind and agrees to have dinner with Dom? Have you ever been so angry with someone that you’re attracted to them? If so, why?

9. Dom says the instigator of a break up always has the power. Do you agree with that statement? Why or why not?

10. On the island, Mackenzie looks off the edge of the bluff. The “...waves hit the beach in the darkness and she saw just the hint of white crests before they faded to black. If she focused on a point slightly away from the waves, didn’t look at them directly, she could see them better.” Other than literally, what do you think she means by this?

Reader extras for bonded by blood 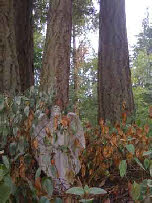 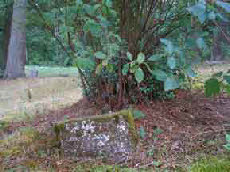 These pictures were taken at the cemetery that inspired the opening scene of BONDED. Can you imagine Dom covered in leaves under one of these trees? I love old cemeteries. Don’t you? 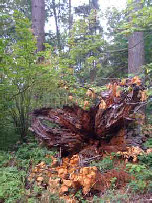 If you want to write non-canon fan fiction where Dom is a pirate or an alien, that’s up to you. But if you want to stay in canon, here are some ideas. Unfortunately, I’m unable to read any Sweetblood fanfics, so please don’t send me any. Have fun!

1. A lot happens between the time when Dom carries Mackenzie out of the cemetery and when she awakens the next day. Write that scene in his point of view...and don’t forget the peanut M&Ms.

2. Dom refers to “that mess down in Florida,” but we never find out exactly what that means. Write what you think happened which caused him to be banished to the Seattle field office.

3. Vanessa is Corey’s bitchy girlfriend. Write the scene where he tells her he’s meeting his sister Mackenzie and her new “friend” Dom.

4. Dom visits with his grouchy mentor, Chuck. After they get out of the hot tub, the scene ends, but their discussion continues. Write what you think they talked about...and don’t forget the cilice.

5. Mackenzie’s roommate Sam has a bad experience with her new boyfriend, who, unbeknownst to her, is a vampire. Dom takes care of the situation, but we don’t know exactly what took place. Write the scene where Dom confronts the guy.

Playlist for BONDED BY BLOOD:

Although I can’t listen to music with lyrics when I write—I get too caught up in the stories of the songs—music is very important to me in the creative process. I listen to playlists for my books when I run. The following songs served as inspiration, and the overall tone, from start to finish, mirrors that of the book.

Back in Your Head – Teagan and Sara

Come Back When You Can - Barcelona

I Will Follow You into the Dark – Death Cab for Cutie

Nothing In My Way – Keane

When We Die – Bowling for Soup

Easy Way Out – The Pink Spiders

Believe in Me – Rooney